Upgrades increase your computer’s speed and make it better equipped to run the latest software and video games. It is not at all certain that it is necessary to replace the computer if it is three years old and slow and slow to operate. An upgrade to an SSD hard drive and more RAM can give it new life and extend its life by a few years.

Upgrading is economical and environmentally friendly

Custom build is a good option

Upgrading is an affordable solution.

Before you “throw away” your computer and buy a new one, you should check if it can be upgraded and if it pays off.
When the old computer becomes slow it is usually because it is running new software that is heavier to run than the one that was originally on it. By upgrading the hardware, on the other hand, you can speed up your computer and make it better equipped to run this new software.

If your computer is equipped with a powerful processor such as Intel Core i5 or Intel Core i7 then it is very likely that it pays to upgrade it. By replacing the old hard drive with a new SSD drive and increasing the RAM along the way, your computer will be up to 40% faster in all processing. Therefore, there is often no reason to throw away your computer and buy a new one. This is sometimes nothing more than a waste of valuables.

In fact, it is not always possible to upgrade hard drives and RAM in laptops, but it is possible in almost all desktop computers. Today, many laptops are manufactured so that the RAM is built into the computer’s motherboard and sometimes the hard drive as well. This is especially true for newer models of Apple laptops, but the manufacturer seems to prefer that we buy a new computer rather than upgrade or fix the old one. Some PC makers are on the same line as Apple, but they are not many.

Custom desktops are usually a much better option than buying a ready-made computer. With custom build, you can choose the hardware you want for your computer and decide its size. You can choose from everything from a small and powerful small computer that can be mounted on the back of the computer screen to a giant tower computer and everything in between. We custom-build home computers, business computers and game consoles and provide advice on choosing hardware. 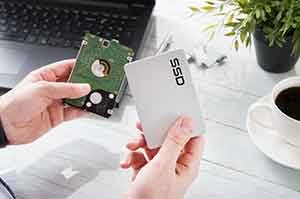